Broken and scratched screens are a constant problem for iPhone and iPad owners; approximately 90% of all Apple repairs carried out by our iTechnicians are screen replacements.

Naturally, Apple are trying to address this problem, and they appear to have filed a patent detailing some of the ways they might use sapphire glass, for example as a replacement for the current Gorilla Glass on their future devices such as the iPhone 6 or new iPad.

Sapphire is harder than any other natural material (except diamond) and a sapphire glass screen would be three times stronger than Gorilla Glass, and roughly three times more scratch resistant. This could mean an iPhone or iPad screen that couldn’t be scratched by keys, and wouldn’t crack even if you dropped it on a concrete sidewalk.

Sapphire glass sounds like great news, but there are potential cost implications. A Gorilla Glass display currently costs less than £2, but the damage resistant and crystal clear sapphire glass displays may cost around £20.

We surveyed in total 1,206 customers who had recently requested an Apple screen repair quote, and asked them to answer one simple question:

Would you pay extra to own an iPhone or iPad with a more damage-resistant screen?

The answer options were:

Nearly 80% said; yes, they would pay extra for an iPhone or iPad with a hardened screen.

The graph as produced by Survey Monkey: 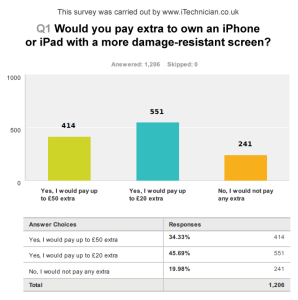 Apple should certainly consider selling future iPhones and iPad devices with the option of a sapphire glass screen, provided they could keep the additional cost down to roughly £20 extra.

As for now, if you need an immediate iPhone or iPad screen repair or replacement start your search for your local iTechnician above.